What can we learn from the 1,600 highest earning indie developers

Only 10% of Steam developers have ever made more than $100k in gross revenue. This article explores what they’re doing that other developers aren’t. It covers self-publishing, genre focus, number of games developed and more.

The last article I published covered all of the 44,000 developers on Steam. It showed how many games they publish, how much money they make, what genres they focus on etc. It’s an interesting starting point, but what really interested me was to see if the top developers stand out in any way.

This article buckets Steam developers into 5 categories based on their lifetime earnings on Steam:

1,600 developers have made more than $1m in gross revenue on Steam

To set the scene, let’s cover how many developers of each bucket do we have. 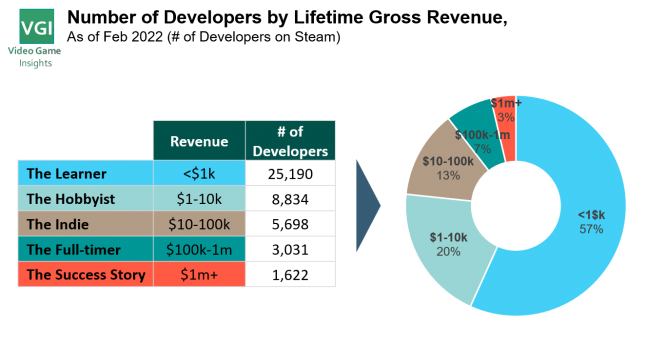 Yes, only 3% of indie developers ever make more than $1m, but that’s still over 1,500 indies who have done so. Let’s see what they do that others don’t.

Top developers don’t give up and keep publishing games

The Success Story’s average revenue per game is a lot higher than that of smaller or less successful developers. That’s not necessarily big news. The success stories, on average, have made over $3m per game.

The learners and hobbyists have typically made 1-2 games on Steam. And that doesn’t necessarily result in instant success, so a lot of new developers end up giving up.

The Success Stories have, on average, released 4-5 games, many of them much more than that. Not all of their games end up being successful.

Take Reiza Studios, for example. They’re a Brazilian game development studio focusing on making realistic racing games. Their first game, Formula Truck 2013, was released in 2013 and made <$100k. Since then, each game they’ve released has made more money than the previous. Automobilista 2, released in 2020, has made millions.

Unfortunately, this also sometimes works the other way around. Game developers with initial success end up releasing new games that don’t reach nearly the same level of success. Key take-away? You don’t always know what ends up a hit, especially with limited marketing budgets. Successful developers keep making games to increase the chance of making a successful release.

Top developers are more likely to leave publishing for someone else

Know what you’re good at and leave the rest to others. That’s what the top indies seem to have learned. 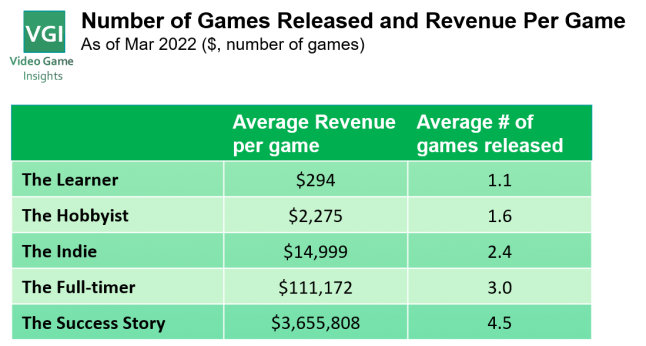 There is definitely value that good publishers with the right fit can bring to indie developers, especially if the indie developer has limited marketing experience themselves.

There are strong synergies in making games in similar genres.

Top developers understand that. Look at any top indie studio out there and you’ll see a strong signature and style that is consistent across games – from genre to art style to camerawork.

On the other extreme you have the Learners and Hobbyists who are still developing their style. They explore many genres and types of games before they settle on the one that suits them well.

Note that these bar charts don’t add up to 100% for the developer type as some games fall under several genres. Each % indicates what % of developers’ games, on average, fall under that particular genre.

This is why market research before making a game is important. Knowing that your sub-genre is popular upfront makes a difference.

When looking at popular genres and sub-genres, it’s also important to consider the current Steam top charts. Looking at 2022 top grossing games as of March for example, we can see that action games have been incredibly successful – 7-10 of the top selling indie games have action elements. A lot of them also have co-op / multiplayer elements.

On top of general platform genre preferences, recent trends need to be considered. 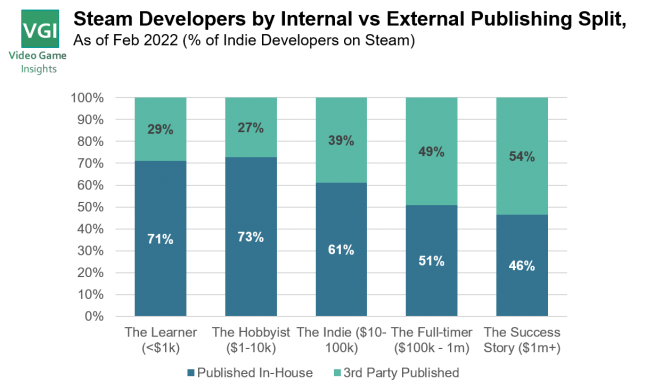 Note that this doesn’t mean that the top developers always make whatever they think is going to be the next hot genre. Specialisation remains important. But they can adjust some elements of the game to fit the players’ expectations.

What have we learned from looking at the top developers in an analytical way?

There’s no magic formula to being a successful developer, but the trends are pretty clear.

This article was originally published on the Video Game Insights blog. VG Insights is a Steam market research platform focusing on helping indie developers make better decisions. We have recently released a Steam top charts page, showing which games are most played or generate the highest revenue.